The Studebaker President was manufactured from 1926 to 1942 as the premier model for the Studebaker Corporation. In 1955, the nameplate was introduced again, but the reintroducion was shortlived – the name was retired after the 1958 model as Studebaker decided to focus on the compact Studebaker Larks instead.

Back in the 1920s, Studbaker’s president Albert Russel Erskine was intent on making the President the finest car in the United States, and he made sure the development project had a lot of resources. The first generation of Studebaker Presidents competed for market shares with considerably more expensive cars produced by Lincoln, Cadillac, Packard and Chrysler.

In 1928, the Studebaker President set 118 stock card records, and Presidents produced 1928-1933 established numerous land speed records, including some that remained unbroken for over three decades.

In 1933/1934, Studebaker went into recievership and Erskine committed suicide. This marked the end of the really big and intimidating Studebaker Presidents.

Short facts about the Studebaker President

The first generation Studebaker Presidents was produced 1926-1933. The bodystyle lineup consisted of a 2-door roadster and a 4-door sedan.

Features introduced with the 1931 Studebaker President 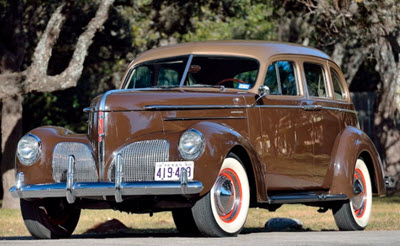 With Studebaker Presidents manufactured from 1936 and onward, the influence of French-American designer Raymond Loewy is apparent. Referred to by the press as “the man who shaped America”, Loewy was a prolific industrial designer who, among other things, designed the Studebaker Avanti and Champion, made the livery for Air Force One, created the logos for Shell, BP and Exxon, designed Coca-Cola vending machines, and gave the Lucky Strike package its distinctive look.

The American artist and designer Helen Dryden was contracted by Loewy to design interiors for the Studebakers. In an era where few women worked with industrial design in the automotive field, the Studebaker adverts proudly proclaimed: “It’s styled by Helen Dryden.”

Optional steel sliding roof, similar to the sunroofs that would become popular much later.

This year, you could opt for a remote-controlled “Miracle-Shift” transmission with a dashboard-mounted shifter. (This option was discontinued the following year, as the transmission shift lever was moved to the steering column.) 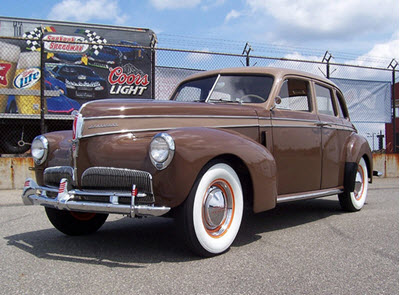 This became a very short generation, since the Studebaker President was discontinued after 1942.

The third generation sported a new body style; a 4-door sedan where the rear doors were rear-opening. This broke with the conventional front-opening rear doors, the so called “suicide-doors”. Also, the running-boards were concealed and there were no rear quarter-windows. 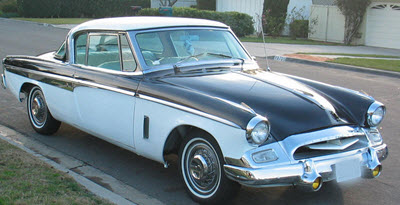 The most famous of the 4th generation Presidents is the Studebaker Speedster, which was only produced for the 1955 model year. For the 1955 season, it was Studebaker’s halo model.

Based on the President hardtop coupe, the Speedster had a larger front bumper and a gigantic chrome grill. When first displayed at car shows, the Speedster garnered a lot of positive attention, which convinced Studebaker to make more cars than initially planned. In total, 2,215 1955 Studebaker Speedsters were made.

The list price for the Speedster begun at $3,346 which was roughly $800 more than what you would pay for a base President State hardtop for that same model year.

Examples of standard equipment for the Studebaker Speedster:

There was no difference in price between automatic drive and overdrive transmission.