The Rolls-Royce Silver Ghost was a car model originally known as the Rolls-Royce 40/50 h.p. It was after getting to know the Silver Ghost that the prestigious British automobile magazine Autocar hailed Rolls-Royce as the makers of “the best car in the world”, a phrase that Rolls-Royce would later come to use in their marketing.

Quite a few Silver Ghosts have survived into our time and many of them are still running. One well-preserved example is the Silver Ghost exhibited by the National Motor Museum in Beaulieu, England.

The chassis and engine of the 40/50 h.p. were used as the basis for a range of Rolls-Royce Armoured Cars.

At the 1906 Olympia car show, Rolls-Royce premieered two chassis for a new automobile designated the 40/50 hp. The 40/50 hp was actually so new that the two cars weren’t even really finnished completely in time for the show, and they wouldn’t be ready for press testing until March the following year.

Chassis and suspension: Ridig front and rear axles. Leaf springs all round.

Engine: The first 40/50 hp had a side-valve, six-cylinder, 7036 cc engine, with the cylinders cast in two units of three cylinders each.

Crankshaft: Seven-bearing, with full pressure lubrication. The center main bearing was extra large, in order to decrease vibration. In essence, the engine was divided into two 3-cylinder units.

Ignition: Two spark plugs for each cylinder. In the earliest cars, trembler coil was used to produce the spark in the base model, with magneto as an optional extra. If you elected magneto, the instruction was to start the engine on the trembler/battery and then switch to magnet.

Brakes: The earliest 40/50 hp cars only had brakes on the rear wheels operated by a hand lever, with a pedal-operated transmission brake for the propeller shaft.

Also in 1913, the footbrake system moved to drums on the rear axle.

From 1921, buyers could chose magneto or coil ignition. 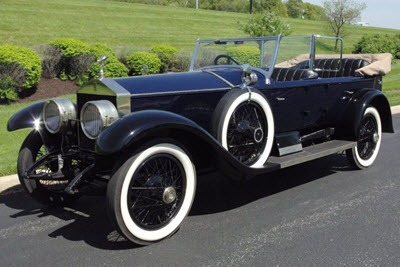 Due to continous improvements, the power output of the engine eventually reached 80 bhp (60 kW) at 2,250 rpm.

During World War I, development of the 40/50 hp was suspended. The same chassis and engines as for the 40/50 hp were supplied for use in Rolls-Royce Armoured Cars. (In September 1914, all available Rolls Royce 40/50 hp chassis were requisitioned by the British Army to form the basis for armoured cars.)

After the war, development resumed, but despite the continual improvements carried out in the 1910s and 1920s, the 40/50 hp car didn’t keep up with its main competors, and went from being superior to inferior. In the year 1913, just before the war, 742 units had been sold. For the year 1922, the sales number had sunk to 430, despite the economy being significantly improved after the end of the war. Rolls-Royce realized that it was time to launch a replacement, and in 1925 they introduced the New Phantom, also called the 40/50 Phantom. After this, the older 40/50 cars were commonly referred to as Silver Ghosts by Rolls-Royce to avoid confusion.

In 1912, the English aviator and racing driver James Radley competed in the Austrian Alpine Trial with a Rolls-Royace 40/50 hp, but the 3-speed gearbox proved unsuitable for ascending the difficult Katschberg Pass.

For the 1913 Austrian Alpine Trial, a factory team of four 40/50 hp cars were created. These cars were fitted with four-speed gearboxes, and their engines were 75 bhp (56 kW) instead of 60 bhp, something achieved through increased compression ratio and larger carburettor.

The Rolls-Royce team won six awards, including the prestigious Archduke Leopold Cup. This garnered a lot of attention among car affectionados, and replicas of the modified 40/50 hp were created and sold. These replicas were officially named Continental models, but became commonly known as Alpine Eagles – a nickname coined by the chief test driver Ernest Hives. (Hives would eventually become the Managing Director of Rolls-Royce.)

In 1907, Rolls-Royce’s Commercial and Managing Director Claude Johnson made a special order for a 40/50 hp that would be used as a demonstrator car, e.g. by participating in trial drives and test runs. The twelfth 40/50 hp to be made, with chassis no. 60551, became this car, and coachbuilder Barker built an open-top Roi-des-Belges body for it.

The car was painted with aluminum paint and given silver-plated fittings. Due to its look and for being so silent, it was called the Silver Ghost, and a plaque with this name was placed at the bulkhead. It’s registration was AX 201.

The Silver Ghost participated in the Scottish reliability trials of 1907, and also did a 15,000 mile test run that included driving between London and Glasgow 27 times!

Both events were heavily publicised since Rolls-Royce wanted to showcase how silent and reliable their new 40/50 hp was. In this era, automobiles were well-known for having frequent failures, and they also had to make do with road conditions that were far from suitable for high speeds. Rolls-Royce took a big risk by inviting journalists to events such as these, but it worked out well for them and the Silver Phantom successfully broke a long series of records, providing the press with exciting things to write about that also depicted Rolls-Royce in a favorable light. After having been driven for 7,000 miles, the total cost for service added up to £2 2s 7d (£2.13) – a negligible sum for Rolls-Royce’s target group.

Several other 40/50 hp cars were given names, but none stuck like the Silver Ghost. Eventually, people began calling all 40/50 hp cars Silver Ghosts, not just the AX 201 unit. Rolls-Royce stuck with the formal name 40/50 hp only and didn’t officially regonize the name Silver Ghost for 40/50 hp cars until 1925, when they were getting ready to launch the Phantom range and wanted to avoid mix-ups.

Since it came back to Rolls-Royce in 1948, the AX 201 has been used for publicity purposes and travelled around the world.

It is considered one of the most valuable cars in the world. In 2005, it was insured for the equivalent of 35 million USD.