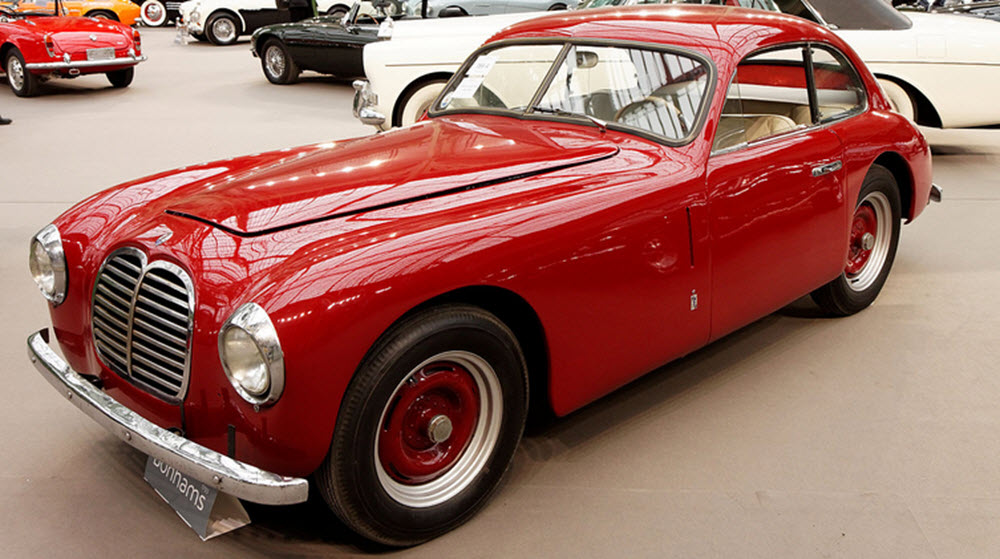 Maserati A6 were a series of grand tourers, racing sports cars and single seaters produced by Maserati in 1947-1956.

Why are they called A6?

The A is a referrence to Alfieri Maserati, one of the Maserati brothers.

The 6 is because of the straight-six engine used by these cars.

The 1.5-litre straight-six engine used in most of the Maserati A6 cars was the A6 TR. It was called TR since it had a Testa Riportata, i.e. a detachable cylinder head.

For the Maserati A6 GCS two-seater, a 2-litre straight-six (120 bhp) engine was used instead. The engine block was made from cast iron.

Short facts about the Maserati A6

Produced in 1947-1950, the A6 1500 was Maserati’s first production road car. The brother’s started working on it in 1941, but World War II delayed the project. Once the war was over, they worked hard to quickly get it into production, and the first chassis – bodied by Italian car design firm Pinifarina – were unveiled at the Geneva Salon International de l’Auto in March 1947.

The prototype shown in Geneva was a two-door two-seat sports coupé (berlinetta) with three windows and tapered cabin. The front wings were fully integrated and sported triple square portholes. The headlamps were hidden, contributing to the car’s futuristic look.

When the car was put into production, the designed was toned down. Among other things, the hidden headlamps were scrapped in favor of tradtional ones. Eventually, a second side window was added as well.

All in all, 61 Maserati A6 1500 cars were built in 1947-1950, with a top speed varying from 146 km/h to 154 km/h. The suspension system featured double wishbones at the front and solid axle at the rear, and Houdaille hydraulic dampers and coil springs on all four corners.

Carburettor: Single Weber carburettor (Although, towards the end of the production era, some of the cars were fitted with triple carburettors.)

The Maserati A6G 2000 was only produced 1950-1951. It premier at the 1950 Turin Motor Show with coachwork from Pinifarina. Only 15 cars were assembled after the initial one.

The chassis had the same measurements as for the A6 1500, but the rear axle was sprung on semi-elliptic leaf springs.

The Maserati A6GCS/53 was created for the World Sportscar Championship and fitted with a 170 bhp engine. 52 Spyders, designed by Gioacchino Colombo and refined by Medardo Fantuzzi and Celestino Fiandri, were made. In addition to this, Vignale made one spyder; and four berlinettas and one spyder were designed by Pinifarina’s Aldo Brovarone on commission by Rome dealer Guglielmo Dei.

The Maserati A6GCS/54 premieered at the Mondial de l’Automobile in Paris. With its 150 bhp, the engine was less powerful than the ones used in the A6GCS/53. The A6GCS/54 came in berlinetta, barchetta and spyder versions, with designs by Pietro Frua, Carrozzeria Ghia and Carrozzeria Allemano. A total of 60 cars were assembled.

The Maserati A6GCS won the Polyphony Digital Award in 2014.

The top speed for these cars was between 195 km/h and 210 km/h, depending on configuration.