The Aston Martin DB 2/4 Mark III is my dream car and ”I will by one once I win the lottery or a big casino jackpot. A boy can dream right! If you also want to keep the dream alive then I recommend that you visit casino.zone to find out how you can get a chance to win big casino jackpots without risking any of your money.

In Iam Fleming’s novel Goldfinger, the British Secret Service agent James Bond drives a DB Mark III, although Fleming calls it a DB III. In Fleming’s novels, this is the only Bond car to feature special gadgets. When the novel Goldfinger was turned into a movie, Bond drove an Aston Martin DB5 instead, which helped that car become one of the world’s most legendary sportscars.

In total, 551 DB Mark III cars were produced, most of them 2+2 hatchbacks. The 2-seat drophead coupé was made in 84 units, while the number of 2-seat fixed head coupés was no more than five. All the fixed head cars were made close to the end of the production period for the DB 2/4 Mark III and were given te mid-spec DBD engine. Unlike the hatchback, all the 2-seaters had conventional hinged boot lids. 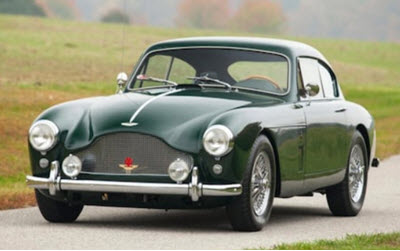 A high-output DBB engine was also available as an option, but was selected for only ten cars.

One Mark III car was fitted with the special DBC competition engine, with racing camshafts and special connecting rods. The compression pistons were for very high compression, but it is unknown exactly how high, possibly as much as 9.5:1. There were three twin-choke Weber 45 DCO 3 carburettors. Allegedly, this configuration produced 214 b.h.p.

After the first one hundred cars, all following Mark III cars had Girling disc brakes as standard on the front wheels. Also, many owners of the older cars had their cars upgraded with this type of brakes.

The front grille designed for the DB 2/4 Mark III would go on to become emblemic for Aston Martin cars.

After the first few cars had been assembled, the design was changed somewhat; the tailfins were modified to fit rear lights from the Humber Hawk.