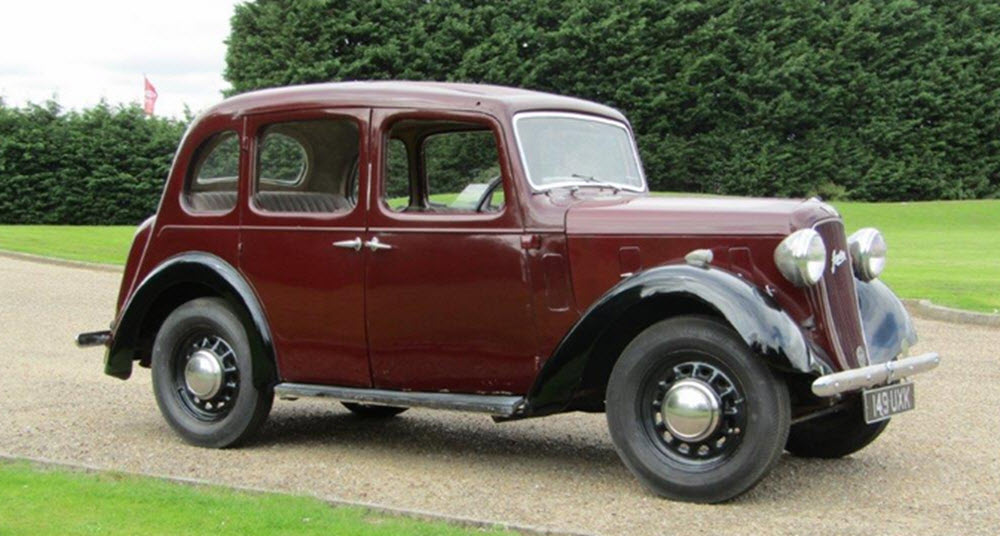 Austin Ten was a small car produced by Austin from 1932 to 1947. Approximately 290,000 units were produced, and in the 1930s this was Austin’s best-selling car. The Austen Ten offered something midway between the tiny Austin Sevens (introduced in 1922) and big Austin Twelves (introduced in 1921).

The Austin Ten was car characterized by a conservative style, with a ladder chassis that dipped down 7 cm between the axles to achieve a low overall height. Upon this chassis was a pressed steel body. For suspension, helf-elliptic springs were mounted on silent-bloc bushed and damped by frictional shock absorbers. The engine was a 1125 cc 4-cylinder side-valve engine capable of producing 21 bhp / 16 kW, and it drove the rear wheels.

For the permier year, a four-door saloon was offered in two different versions. The basic model cost £155 and had a top speed of 55 miles per hours (89 km/h). The pricer option was the Sunshine or De-Luxe, which came with leather upholstery and an opening roof. For this, you had to shell out £168. 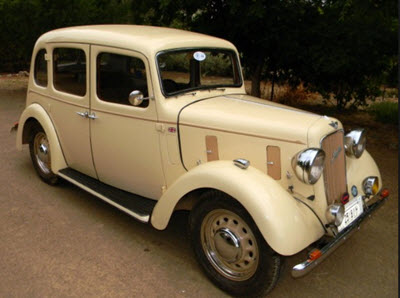 Introduced in 1934, the Ten-Four sports tourer named Ripley was a close-coupled 4-door car. Improved engine breathing had boosted the ouput to 30 bhp.

The plated surround was replaced with a slightly sloping one painted in body colour.

In January 1936, the Sherborne body style was added to the lineup, costing £10 more than the Lichfield. This was a six light automobile, meaning that it had three windows on each side, and one behind the rear door. The roofline of the Six-light Sherborne followed the then so fashionable airline style, sloping to the rear to form a flush back. Inside the car, the rear part sported extra deep seating, with armrests.

Steering: Worm and sector, with an hour-glass worm

Roof: The buyer could chose between fixed and sliding roof.

1937: The Cambridge saloon and the Conway cabriolet

In December 1936, Austin relased the 1937 Cambridge saloon and Conway cabriolet.

In May 1939, a car with a semi-unitary structure was launched (the body shell incorporated the floor). It was styled by the Argentine-born designer Ricardo “Dick” Burzi.

As World War II rolled in, priorities changed. No Austin Ten tourers were made; instead production focused on saloons and utilities, including pick-ups and vans.

During the war, existing British car designed were adapted for use by the armed forces. Both the Austin Ten and the Austin Eight were used in this fashion, along with designs from other manufacturers, such as the Morris 10 HP Series M and the Standard 12 HP Series UV. The adapted utility automobiles became known as Tillys (derived from utility). Before the war was over, roughly 53,000 Austin Ten saloons and “Tillys” were made.

After the war, Austin changed back to producing cars for the civilian market, but the British economy was struggling and most of the available Austin Tens cars were exported. The first one arrived in the United States as early as July 1945. In September, English automobile export to Switzerland was restarted in the form of two Austin Tens.

Production of Austin Ten saloons stopped in October 1947, when the Austin A40 took over.